The "17th Colossus" legend is an urban legend revolving around the 2005 action-adventure game Shadow of the Colossus.

Although there are 16 Colossi in the final game, rumors were spread soon after its release about a secret 17th Colossi that could be found somewhere throughout the game.

There is some kernel of truth behind this rumor. The game’s creator, Futimo Ueda, initially planned for the game to include 48 Colossi before realizing that hardware limitations would render that impossible and scaled it back to 24. From there, a further 8 Colossi were cut before they were developed much:

The most commonly cited method for unlocking the 17th Colossus (which of the cut 8 it is is unknown) is by successfully climbing the Shrine of Worship, whereupon the 17th Colossus will disappear. Some claim that Sirius the boar would appear atop the Shrine and would have to be pushed through a hole in the roof. Some claim that the 17th Colossus was a sea serpent that could be encountered by swimming into the ocean a far enough distance. Still, others say that it was a dragon that would be fought in a normally inaccessible area of the map. Unfortunately, scanning the game’s files reveals no hidden Colossi, although textures that could belong to Sirius and Dionin do exist. 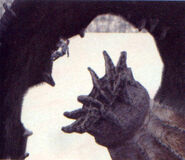 Sirius
Add a photo to this gallery

Retrieved from "https://gaming-urban-legends.fandom.com/wiki/17th_Colossus?oldid=1482"
Community content is available under CC-BY-SA unless otherwise noted.